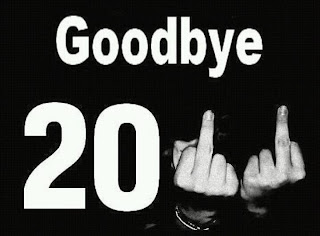 No, I don't share the sentiments of the above photograph, humorous as it may be. Believe it or not.

Yes, today, the last day of 2011, finds me low on cash, moving out and into temporary digs on the couch circuit again, and hobbling around from what I guess is a torn calf muscle after slipping on some black ice two mornings ago. (I don't know for sure - I'm yet another of the millions of Americans who can't afford health insurance.)

Yes, this is the year I had to leave Los Angeles (hmmm...where have I heard that before?), and discovered after arriving in Denver that my so-called relationship was a sham.

Yes, a few days ago, I did announce at the "RADIO NAPALM" Facebook group that I finally decided the show was over, that I no longer had the time nor energy to produce it, and that I had tendered my resignation to Woody Radio.

I could list endless negatives for 2011. In fact, the last few years have not been great ones.

But, I actually think this was a better year than most.

Denver has turned out to be one of the best places I've lived. My health has certainly improved since leaving the poisoned Los Angeles air. I also find this place friendlier and more affordable than any place where I've lived in awhile.

I latched onto a job that has paid me and treated me better than any I've held in ages. (Yes, I was suspended briefly, and forced to work low-paying temp jobs to keep money coming in, however scant the pay was. But I return to the real job on Monday.)

I gained the focus, perspective, and inner peace to realize that I needed to strip my life down and concentrate this next year on two goals: 1) Returning to music with a new Hormones lineup; and 2) finally finishing and publishing my novel.

Hence, you won't see a lot of rock journalism in the next year from me. Radio is out of the question, too. Not sure how often I'll blog.

But I like the idea of working hard the next couple of months, finishing getting the musical equipment I need, and beginning the assembly of a new Hormones in maybe February or March.

I like the idea of finding a small place of my own around that same time.

I like the idea of the novel being done, and beginning a new literary life to parallel my musical one.

Those are the two things I do best: Write and rock. I don't enjoy working as a rock journalist, and haven't for years. Yes, I'm good at it. That doesn't mean it doesn't wreak havoc on me and my psyche.

Yes, I'm good at radio. I don't like how it takes over my life, and sucks away energy I could spend earning a living and playing rock 'n' roll.

No, 2011 was a good year. At least, it was on a personal level. I learned many a valuable lesson, and didn't have to pay too dearly for the education. I can see things are actually on an upward trajectory.

So, onward! All of you readers: Live. Love. Create. Don't get ground down by life's cruelties. The only way we change this world is by changing our personal worlds, and living as if the change has already happened.