Out Of Traction, Back In Action.... 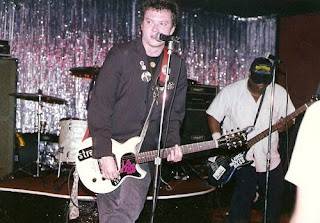 I'm rather fond of that photo up there. That's Yerz Truly in 1995, onstage with The Hormones at The Green Onion in San Antonio, TX. Over my shoulder: My trusty Les Paul Jr. that I wish I'd never lost to the pawn shop in 1999. To my right: Ron Williams, my musical soul mate, with whom I wish I was still making music. In this photo, we are busily christening the stage at The Green Onion, the Sons Of Hercules' club, the first band to take it.

There was a time when this was a regular occurrence in my life. I lived to make music. I haven't been able to in a long time. And that is now changing.

Two years ago, after interviewing Iggy And The Stooges guitarist James Williamson for Guitar World magazine, I was able to purchase the first guitar I've owned since I lost all my gear to the economic collapse in 2008. Last weekend, I finally finished paying off the first amp I've owned since then.

I have the bare bones now: A guitar, an amp, and a tuner. I can return to what I do best.

Quietly, over the past year, I've met musicians I feel would make a fine new lineup of The Hormones here in Denver. Once I can hash out a rehearsal schedule that can synch with everyone's lives, we'll get to work. I've also joined Dave Mansfield's new band The Roxy Suicide, strictly as their guitarist. So, for the first time in my musical life, I'll be pulling double duty.

This moment means a lot to me. I've honestly felt lost, not being able to make music for so long. And if you look at the last decade, I've been kept off the stage and out of the studio for most of it, due to personal circumstances. I've now got an overload of songs to bring to life, and to bring to the public.

So, yeah. Part of the pledge I made earlier this year -   1) Return to music with a new Hormones lineup; and 2) finally finish and publish my novel  - is coming to pass. Now I have to tend to the other part of that pledge.

Meantime, I'm talking to a label or two. You should be seeing Hormones music, new and old, before the year is out. Meantime, I've set up a Hormones page at Facebook, under construction as I try to piece the band's history together. Please feel free to add it to keep apprised of news as we kick this corpse back to life. You should also add The Roxy Suicide's Facebook page, to keep abreast of that band's movements.

Now if you'll excuse me, I have songs to write. Thanks for reading this.
Posted by timnapalm at 7:44 PM 2 comments:

My Irregulars! I interrupt my unemployment to bring you excellent news for all who mourn the death of "RADIO NAPALM!" Punk Boss Radio LIVES! Rejoice! And it's all due to my longest-lived friend in the entire punk community! The man New Bomb Turk Eric Davidson expertly proclaimed was the other side of a coin I had no idea I was part of! A man who proclaimed in a nationally-published Boris The Sprinkler tour diary that I was possibly more manic than he and needed to lay off the Dr. Pepper! A man who made it into both The Encyclopedia Of Punk and herr Davidson's We Never Learn, even if I didn't! We ("we," of course, meaning "I") are referring to the one and only REV. NORB!


*ahem!* Anyway...Norbie has begun a new weekly podcast series at the almighty GaragePunk Hideout called "Bubblegum Fuzz." As should be indicated by the title, the one-hour, downloadable show is hairline-deep in the sorta garage/punk/power-pop gunk that's been the righteous Rev's cup-o-meat as long as I've known him. (No, don't ask either of us how long that's been! We choose not to remind ourselves and each other of our geezerhood....) I mean, dig the playlists! Von Zippers? Dwarves? Little Killers? Monkees? Paul Revere And The Raiders? The Ruts? The A-Bones? Slickee Boys? Plastic Bertrand? Len Price 3? How can ya go wrong?


Factor in Norb's patented motormouth baritone backtrack sections (that voice was MEANT for radio!), and you have one hell of an entertaining listen! Seriously: "Bubblegum Fuzz" is very much irritating my jones to return to radio! (WHICH WILL NOT HAPPEN! At least, not this year.) So, whaddaya waitin' for?! Traipse over to Norb's GaragePunk Hideout blog and commence to clicking and downloading! It's the most fun you can have with your clothes on in 2012! Over and out....

Posted by timnapalm at 1:23 PM No comments:


Oh, you kids don't know how good you have it! In my day, I had to stand over a turntable (that thing we used to listen to music on - yeah, kinda the iPod of our time! Pay attention!) and play Raw Power at half-speed, guitar in hand, to try and figure out the savage six-string stranglin's James Williamson was emanating. But thanks to a School Of Rock in Michigan (home state of Iggy And The Stooges, obviously), you can now learn directly from the master himself how to properly  bash out "Search And Destroy!" (And I emphasize "properly": Turns out there have been certain nuances I've gotten wrong this whole time....) So, whaddaya waitin' for? Grab your Les Paul, set the amp controls to "stun," and watch Straight James give you the straight dope on "Search And Destroy!"