REPOST: Something I rarely talk about.... 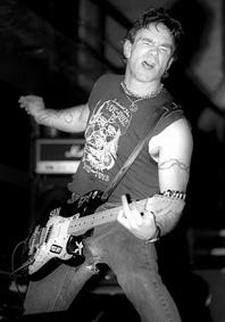 TIM SEZ: Hi. I realize it's been ages since I've posted in this blog - something I intend to repair in the coming days. This repost is from my old MySpace blog from 2008. Ike fizzled before he got to Austin, obviously. In the time since I posted this, my friend's death score was settled, with Bin Laden's capture and execution. (And no, I don't buy any conspiracy theories on this subject. Nor do I buy conspiracy theories, period. Please save it all for your next Alex Jones fan club meeting, thank you.) Troops have been thinned in Iraq and Afghanistan, but.... And there's a chance we may find ourselves in another conflict soon. On a personal level, I reflect that this day began a ten year spiral of personal tragedy and self-destruction I've only come out of in the last few years - miracles do happen. Today, I also reflect that America became a mean-spirited, selfish nation in the wake of this day, and we have never recovered from it nor corrected it - it just gets worse. We never fucking learn....

I repost this every year, so we don't forget, so some semblance of truth remains out there...and for my late friend Johnny you will read about here. He is a real hero. I miss him every day.

Something I rarely talk about
Current mood:  contemplative
Category: Life
It looks pretty certain the day after my birthday, I'm riding out a hurricane. Odd, for the Austin area. Where I grew up, it was more common: I'd been through three by the time I was a teenager, the last one having been Allen back in 1980 (I think it was). Not a big deal, really. By the time Ike hits here, he's gonna be a lotta wind and rain, really.

But, come on, Ike: Could your timing be any worse?

It's kinda par for the course, right now. Something about this decade and my birthday has meant disaster for me. There was the girlfriend who decided to break up with me the week of my birthday, just because that would sting the most, I'm sure. Then, there was the birthday on which Johnny Cash had the misfortune of dying. That really sucked.

But I think the coldest was the group of middle eastern gentlemen who thought it would be really cool to fly a couple of airplanes into the World Trade Center the day before my birthday in 2001.

I slept through it. I was homeless at the time and staying with a friend on 7th and Ave. B, probably three or four miles from the Twin Towers. She was out of town, and I was house-sitting, soon to move in with my friend Sami Yaffa and his girl Karmen. I was working at the time as a professional dog walker, and I got up at 11 AM. It was supposed to be just another day: I was thinking about coffee, looking over the schedule, wondering who the first dog of the day would be, etc., etc. I turned on Howard Stern's show, as was my wont back then (until he said something completely insulting about John Lee Hooker on the day Hook died, and I swore I'd never listen to the tasteless bastard again). And judging by the hysteria I was hearing, it was the end of the world.

I called my boss to find out what was going on. That was when I found out the towers had been hit.

From there, people were calling in left and right, canceling walks; most of our customer base worked in the financial district, so they were now gonna be home. I was getting all kinds of bits and pieces from there: The doorman at the building on Irving Place where a few of my dogs lived reported looking up and seeing the first jet flying so close to the ground, he could see its' markings. My friend Mark who lived two blocks away called me up and told me he was on the phone, talking to his mother, looking out his panoramic view of the southern end of Manhattan...and saw that same jet fly right past his building, shaking him and the whole building. Mark got a front row seat at watching it crash straight into Tower Number One.

These calls were going on for three hours. I couldn't sit down to eat. Finally, about 2 PM, I was able to leave the apartment and walk down to Ave. A, in search of breakfast. Every joint in the neighborhood was crammed to the rafters, it seemed. There were hand-written signs in the windows, advising that the Red Cross needed blood, go to this hospital or that one, go to Bellvue, go someplace, we need blood. The air smelled awful, like burning tires or hair, but worse. It would be that way for months. And can you imagine what it does to a mind, knowing that what you're breathing might be friends of yours'?

I finally squeezed into Sidewalk Cafe, ran into friends I knew from the local rock circuit. The waitresses and bartenders looked like they were gonna have coronaries. My waitress confided in me that they were severely understaffed, especially with the crush they were experiencing, and people due to work that day who lived out in Brooklyn or wherever were calling in because the subways were now shut down and they couldn't make it in. She looked like she was about to cry. Seconds later, some jerk at the table next to me started cursing her out about how long it was taking for him to get his eggs. I slammed my fist on his table and shocked him: "DUDE, DO YOU GET IT? CAN YOU LOOK AROUND YOU? DO YOU SEE HOW OVERWORKED THESE PEOPLE ARE RIGHT NOW? CAN YOU TURN AROUND AND SEE THE COLUMN OF SMOKE WHERE THE WORLD TRADE CENTER USED TO BE? CAN YOU FOR ONCE IN YOUR GAWDFERSAKEN EXISTENCE STOP THINKING ABOUT YOURSELF AND TRY TO PUT YOURSELF IN THE SHOES OF THE PEOPLE WORKING HERE AND THE PEOPLE AROUND YOU?"

"What are you getting mad at me for?" he whined. "It's not my fault they don't have enough people working. I'm hungry." I just stared at him.

I decided to wander a bit after eating and having coffee. People were then walking up from around the disaster site, walking because the subways were shut down, and no cabs can be found. They were covered in soot, looking like some ancient Jack Kirby panel out of a '60s Marvel comic. I ran into Jesse Malin, on his way to buy a protein bar and a newspaper. We started talking about The Strokes' debut album, which had just been released a few days before. (Or maybe that was only in the UK? Well, copies were obviously getting around on import.) And I remember at the time thinking, "Why are we talking about The Strokes in the middle of this?!"

My cellphone rang. It was my mother. She'd been trying to reach me for hours. The satellite dishes for the cellphone companies were based at the Twin Towers. Finally, a provisional satellite path was opened, and she could know I was alive. The family were scared shitless: They had no idea of the geography of Manhattan, and for all they knew, I could be dead.

The days and weeks after were like nothing I'd ever experienced. I remember having to wear a filter mask as I did the dogwalks for a long time, and suffering massive headaches from the air quality. For awhile, you would be forced to present ID at two different checkpoints to MPs if you lived in the East Village, just to get to and from your apartment. Armed personnel carriers would be going up and down Houston St. The middle eastern guys who ran the deli downstairs looked at me with pleading, fearful eyes that told me they were already getting harassed for the color of their skins and their accents. Probably by the same louts I heard that Friday up and down Avenue B, drunkenly chanting, "U! S! A! U! S! A!" I feared those clowns more than I did potential terrorists.

I can remember my mother and I talking, and she kept telling me, "We all understand. We all are with you. We're all going through this together." And I had to tell her that no, there was no way she could understand unless she was here. She got to watch this from the safety of her living room. This wasn't TV for me or anyone else in NYC. This was our lives. And it wasn't fun, and I hoped that she (and everyone else who didn't live here) never had to find out what I was going through.

The worst was finding out how one of my dearest friends was affected by this: Johnny Heffernan was one of my local brothers in rock. His band The Bullys was one of Napalm Stars' brother bands. Johnny was frequently there when I needed him, whether I needed to borrow an amp, or whether I was having to fend off an obnoxious and violent stage invader. I considered him one of my best friends. He was to have left on my birthday to go on tour with The Toilet Boys, doing their lighting.

He was not supposed to be on duty on Sept. 11, 2001. It was supposed to be his day off. He was working instead, trying to get in overtime before he left on the road, to support his wife and young stepdaughter. His company was among the first to respond when Tower Number One was hit. From what I remember, most (if not all) of his company was buried when the tower collapsed. Johnny's bandmates, family, friends, we all held hope that he was still alive. They pulled Johnny's crushed body out one month later.

We all know who killed my friend, as well as the many others who died that day. America invaded Afghanistan shortly after, gunning for Osama Bin Laden. Over time, our leaders began telling us Iraq had some connection with the WTC attacks, that they had weapons of mass destruction, that Saddaam Hussein had something to do with this. This, of course, turned out not to be the case. We are still at war in Iraq. Osama Bin Laden, the man who commanded the men who killed my friend and all those others, remains free.

Happy birthday.
Posted by timnapalm at 8:25 AM No comments: