Happy Halloween With Creepy Uncle Bill And Aunt Alice (Cooper, That Is....)

Happy Halloween from Austin, TX, which has apparently decided to be Seattle for Trick Or Treating, this year. We are getting lashed with rain, since last night. To the point where, as a photo posted by my pal Metal Dave illustrates, the Stevie Ray Vaughan statue's had to learn to swim.... 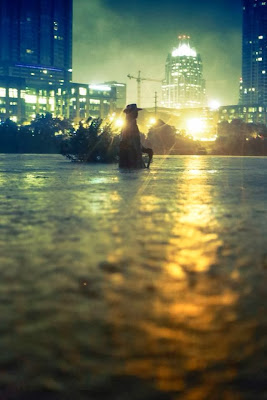 But how are they celebrating All Hallow's Eve in Lawrence, KS? Well, as William S. Burroughs illustrates below, they like to indulge in a little pumpkin carving.... 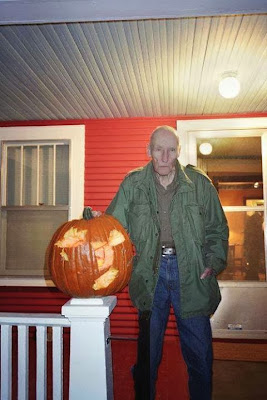 Me? I've got boxes to pack, as there's a new apartment across town awaiting my moving in. So, we'll stop off in Detroit ca. 1971, and let the original Alice Cooper band carry us out with one of rock 'n' roll's most truly terrifying tunes, "The Ballad Of Dwight Fry," done completely live. You even get to see them setting up in this clip! Happy Halloween, y'all!

Posted by timnapalm at 7:21 AM No comments:

Last night, in a fit of solo recording frenzy, I whipped up a minimalist, lo-fi take on an old standard, Doc Pomus and Mort Shuman's "This Magic Moment." I was excited enough by the results, I hastily threw up a Soundcloud page so you can hear it. Hope you enjoy it....

Posted by timnapalm at 7:29 AM No comments: 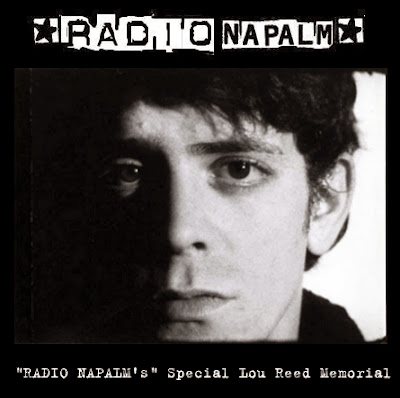 In some ways, the point of this post is moot, the point being to promote a "RADIO NAPALM" podcast that's already well on its way to being the most listened to in the new series. It's already a success, despite the damned thing being hastily assembled in the event of Lou Reed's death Sunday, October 27th, 2013 from complications due to liver disease. That haste means I'm not entirely sure the show's worthy of the audience. Certainly, it marks an occasion where the show for once is not a raving celebration of the punk rock spirit and vintage rock 'n' roll radio it usually is. And how could it be? Lou Reed is fucking dead.

Writing those words don't set well with me. Lou was a prickly bastard, for sure, one who communicated best through his songs, even as he oft times seemed to use his solo career to alienate anyone whose life was saved by the rock 'n' roll he created in The Velvet Underground, and used his own public persona to keep everyone away. I'm personally one who felt he made more lousy albums than good. Transformer is the most obvious example of solo Lou at his best. Berlin. Metal Machine Music is a perverse pleasure. But he mostly seemed to take a perverse delight in holding a middle finger up to the world. Lou also was the sort of artist who really needed a good editor. He had that in John Cale, and in David Bowie and Mick Ronson on Transformer. Left to his own devices, he could not tell his own shit from his diamonds. I mean, really: Did Lou Reed really think collaborating with Metallica was a good idea?

Yet, why is it I feel like Elvis just died?

I don't think it's so much to do with that now-clicheed Brian Eno quote always trotted out in any discussion of the Velvet Underground, about the influence they had being so insanely out of proportion with their pisspoor record sales. I think what really says a lot about Lou's - and the Velvets' - impact is that in the 48 hours since his death, he has inspired so many great writers to write even more brilliantly. These eulogies are instant classics, sure to take pride of place in future anthologies.

This is because, ultimately, Lou Reed was a great writer himself.

Yes, he inspired everyone who heard his records to become a junkie faggot from New York City in a black leather jacket, solid black clothing, and ever-present sunglasses. Yes, he played some of the sickest rock 'n' roll lead guitar ever. Yes, he was a great singer who could not sing, had a limited range, and sounded flat to the rest of the world while sounding like Edith Piaf to all us faux NYC junkie faggots who heard him. But the key to Lou Reed was he was ultimately Raymond Chandler with a rock 'n' roll heart.

Like Buddy Holly, Lou Reed preferred simplicity. He wrote symphonies out of three chords at most. Even as he blew crazed free jazz skronk guitar all over his records, he relied on the simplistic grooves of Moe Tucker's drums and John Cale's three-note bass. And he didn't write lyrics - he wrote stories. Highly literary, poetic stories full of urban gutter journalism, subject matter that was acceptable in novels and movies but is still frowned on in rock 'n' roll or pop music. He wrote of kicks and bad drugs and transvestites and squalor and kinky sex and general bad craziness, in simple, hard-boiled language that was direct and honest. It wasn't celebrating these things. It was simply telling it like it is.

He also had a vulnerability, a gentle side that he was not afraid to flash, at least in song. Ferchissakes, one of the best Velvet Underground songs, a B-side called "Jesus," was an honest-to-God hymn. I now wish I'd included it in this show. But there's a lot I left out. This show could have gone on for hours. There was that much great stuff in Lou's canon, despite that pisspoor overall batting average on good releases versus howling dogs.

Personally, I didn't get it at first. As a 14-year-old Sex Pistols/punk rock besotted youth, I came to Lou at first via Rock 'n' Roll Animal. I kept reading about Lou and the Velvet Underground in every magazine I picked up. Rock 'n' Roll Animal was availble in the five buck bin in the local Krogers record department, and I took a chance. I hated it on first listen, and still do. What's with this heavy metal record with the dirty lyrics? It took hearing Ronnie Bonds spin the Velvets' original of "Rock And Roll" on his old Funhouse show on KPFT in Houston to understand: Lou Reed songs make great rock 'n' roll, not great heavy metal. These are different musics, no matter what you may think. This is why that Metallica team-up still is a head-scratcher....

But looking over my own songs I've written? I've said for years I learned all I know about writing songs from Phil Spector. I still stand behind it, but I can see there's as much Lou Reed there as Phil. There are times I've forgotten some of those lessons, but that's par for the course with growing artistically. But having a good groove, a solid-but-simple riff, some vicious guitar, a lyric that tells a tough truth in simple-but-beautiful language? That's all Lou Reed, through-and-through.

And now Lou Reed's dead, after a lifetime making me hate him more than love him, but loving what I love to the point of obsession. And all I can offer is this half-assed RADIO SHOW?! This just proves I can never hope to repay my debt to the man....

Yet, you guys are loving this, anyway. Despite there being no comedy, no screaming, no echo, no Ed The Engineer or Scooter, and me sounding as morose, stammering, and amaturish as I've ever sounded, you guys are loving this show. Because it's all about Lou Reed: Some early songs, a lot of Velvet Underground, some solo work, and a few musical tributes from those who got it. I have to thank you for that. "PAT FEAR ROCKS!!" That's what it said on the side of his Flying V. And White Flag mastermind and daredevil punk rock prankster Bill "Pat Fear" Bartell is no longer with us - died in his sleep last Monday, following years of health problems. I knew Bill, but not well - we were both ex-fLiPSiDers, for one. So, of course, I had to at least play four White Flag hits and read a poem Tony of The Adolescents composed, memorializing the friend he knew well.

Among other highlights:
It's all NAPALMTASTIC! Now click and play!