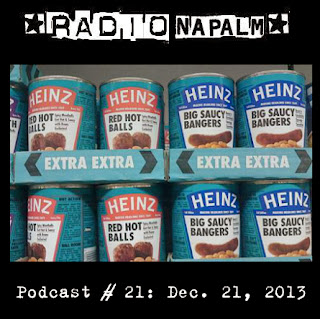 Yeah, I haven't been posting updates to the blog lately, and especially haven't been posting the radio show here. Life has just been a little hectic, working on a ZZ Top story that will run after Xmas in The Austin Chronicle. But here I am today, freshly awakened by my neighbors, who seem to find loud hip hop and "motherfuckers" appropriate at 9 AM on a Sunday. (Well, they do that any day. But....)

Thankfully, we begin this week's "RADIO NAPALM" with METAL URBAIN and "Hysterie Connective" to blast those heathens into submission. And the punk rock comes thick and fast after: BILLY CHILDISH AND CTMF, THE OBLIVIANS, KING TUFF, REV. NORB AND THE ONIONS, THE CLASH, THE MUMMIES, and so much more. And plenty of echo and vintage ads to warm your cockles.

We got Red Hot Ball and Big Saucy Bangers galore this week in The Garage! So, press play and join us! 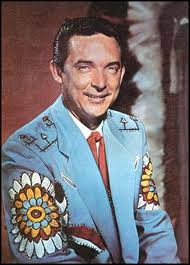 UPDATE ON THE UPDATE: And, of course, Ray actually ended up passing on for real on Monday. Here's the memorial I wrote for The Austin Chronicle: Click here.

UPDATE: A second Gannett newspaper, USA TODAY, just added the following to their obituary. "UPDATE: Reports that Country Music Hall of Famer Ray Price has died appear to be in error. Price's son Cliff Price wrote of his death on Facebook, but was not at Price's bedside in Mount Pleasant, Texas, when he posted. Price's wife, Janie Price, is with her husband and says he is alive. 'Our lovable Ray Price is still with us,' reads a post on her Facebook page. 'When it is the time, there will be an official statement.'" Sounds like Ray's son needs to check in at home more often....

A lot of people are going to be remembering today, in future years, as the day Peter O'Toole died. For this dutiful son of Texas, however, it will be the day Ray Price died.

I could write a full-bore obituary for Ray, certainly. Those hard-shufflin' '50s hits of his created a fresh honky tonk sound, one that resonated greatly with me, and many others. I mean, give a listen to his signature tune, "Crazy Arms," and tell me you aren't affected:


Instead, I will dip into my own back catalog. In August 1996, I interviewed Ray Price aboard his tour bus, prior to playing Austin's AquaFest. The Austin Chronicle would publish is August 23, 1996, as Fiddles Not Violins: The Secret To Ray Price And San Antonio Rose.

"You got that thing on? I hope you don't print it like I'm sayin' it!" Seventy-year-old Ray Price ("going on 71 with a bullet") of Perryville, Texas, son of Walter and Clara Bradley Price, has just looked up from the glass of sippin' whiskey and accompanying glass of orange soda in his hands, having seen that the recorder was switched on when he least expected it. All the better to get some honest answers, see?