"Never Play Any Club That Does Not Stock Your Brand Of Booze!" 17 minutes on the phone with Tommy Stinson 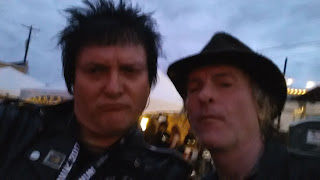 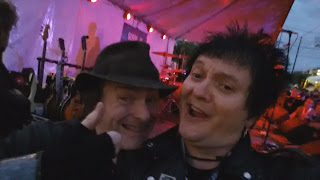 Freddie Kruger came to SXSW, and was kind enough to pose for pics: Me and my twin from another mother Tommy Stinson, 3-15-17

Note: This was to have run in The Austin Chronicle online, an expansion of a brief piece whipped-up for SXSW coverage. Space and time limitations conspired to have it, instead, be posted here. The paper's loss, our gain, eh? *grins* To read my review of last night's Bash & Pop showcase, click all this gray shit.

Click onto Wikipedia, it'll tell you “Thomas Eugene (Tommy) Stinson (born October 6, 1966) is an American rock musician.” Which doesn't even begin to capture how important this Minneapolis-bred singer/songwriter/bassist/sometimes guitarist is to modern rock & roll. How many of you can claim membership in both The Replacements, the kings of sloppy/literate/heart-on-sleeve punk 'n' roll, and Guns N' Roses? Between those two bands, he formed Bash & Pop, whose 1993 debut LP Friday Night Is Killing Me embodied all the lessons Stinson'd clearly learned at the elbow of Paul Westerberg, The Replacements' bruised romantic songwriting engine. Hence it's intriguing that after The Mats' two-year reanimation-cum-victory-lap, Stinson'd kickstart Bash & Pop again in a completely new lineup, issuing a rowdy-n-right new LP titled Anything Could Happen via garage blues indie Fat Possum. One viewing of new video “On The Rocks” (framed hilariously inside a cracked-screen Smartphone) proves none of Stinson's gifts are lost, including his wink-and-grin way through life. Hence, after informing us seconds into this call from his Philadelphia hotel room the fire trucks his neighbors reported in front of his Hudson, NY home were a false alarm (“Not a call you want first day of the tour....”), we had to ask if he was planning on breaking up Bash & Pop again after two years, reforming his post-B&P band Perfect, and then rejoining Guns N' Roses....

Tommy Stinson: [laughs] Oh, you're funny! No, it wasn't really that thought-out, to be honest with you. The only reason I called this Bash & Pop was because this new album was more of a band record. My last two solo records (Village Gorilla Head in 2004, 2011's One Man Mutiny), I just kinda piecemealed together. I played way too many instruments and wore way too many hats, and overthought quite a bit of it, honestly. I wanted to make more of a band record, the exact thing I was going for when The Replacements fell apart the first time. This record became more of a band record because I now have a band (Steve Selvidge, lead guitar; Justin Perkins, bass; Joe Sirois, drums) that can actually play, that can add something, that looks good enough, that sorta thing. It just made sense, and the people I played it for said it sounded like a Bash & Pop record. So, I just kinda went with it.

Tim: It is exactly what you have always done best: Straight-up rock & roll with highly literate, heartfelt songwriting, exactly as you have done since you were a teenage kid playing bass in The Replacements. It sits exactly at the crossroads between the Faces and Johnny Thunders' Heartbreakers.

There you have it. I'll take all of that crap. [laughs]

It has to be asked: What happened? It seemed like The Replacements were going very well a few years ago. Is this something you can talk about?

Well, yeah – we were going well then. Then we got to a point where, “Well, that's not going very well anymore!” [laughs] So we put the kibosh on it. For the most part, I think we had a really good run. We probably played a little longer than we shoulda. But all things considered, it worked out fine. We had fun with it, then when it wasn't fun, we stopped. That's just how we do things.

I got to see the two ACL shows. You blew my mind, that first show! It was like seeing The Clash when I was 14! The second show was more like the gig I saw in your heyday, where you showed up completely tanked and played 162 covers you'd never played in your life...

[laughs] Exactly! More shenanigans were thrown in that time....

It would've been nice to have gotten a new Replacements record, other than the benefit record for Slim (Dunlap, fallen 2nd Replacements guitarist).

We set out to do a record when we did that reunion tour and stuff. We tried three times in three different studios, and none of the situations were right for it. We kinda gave up quick on it. To be honest with you, I don't think Paul was that jazzed on making a new record to begin with. I think he has a lot harder time than the rest of us competing with his past, his legacy. I think it stuck in his chassis, the longer he thought about it.

Do you think you guys will work together again in the future?

Yeah! We've always done shit together, even between Replacements stuff. We've played on each others' solo records and shit. We're just drawn to each other, for whatever reason. We'll see. We've gotta walk away from this mess we made. “Eh, let's do this gig and go home!” [laughs] “Later! Talk to ya down the road apiece....” That's about as much thought as it got.

Well, that was the spirit of the band, to begin with. I always said that The Replacements didn't give a shit better than anyone!

We should talk more about Anything Could Happen. How long have you had these songs waiting to be recorded?

A good handful of them have been around awhile. The oldest song on the record is probably 25 years old. I've attempted it a couple of times. It just took forever to finally rear its head. Half of the record's been around awhile, the other half we wrote on the spot. Some of them got recorded when we recorded all The Replacements stuff when we were heading out on those tours, and they just didn't work out. So I took 'em back and recorded 'em in my house with my friends and called it Bash & Pop.

You're primarily known as a bass player, but you play guitar in Bash & Pop. Do you prefer one over the other?

No, not really. I have a short attention span for anything, so I switch around all the time, just for shits and giggles. I haven't played drums in a band in a buncha years. But I kinda get off on playing all that shit. This time around, I didn't want to wear a buncha different hats. I wanted a more spontaneous record, have more of a band vibe, rather than sit around and wear myself out noodling around on a guitar for fuckin' months on end. It was all done in my basement, all playing in the room. A couple of times, I couldn't conjure a bass player, so I played bass myself. But it was all done as live as possible, drums and all.

Do you think you'll continue as Bash & Pop?I think so. It's a more enjoyable way to make music. So as long as these guys want to continue to play, we'll keep it going. Everyone seems to understand each others' playing, so it works out pretty good.

Can you talk a bit about having been in Guns N' Roses? That must've been a hell of an experience.

It was a good gig. It served me well, until I couldn't play anymore. I had personal issues at home that prevented me from touring with them - a little kid and a soon-to-be-ex-wife and all that kinda nonsense. So, I had to walk away from that, but it was on good terms. And it was the right time. Now they're doing their reunion tour, havin' a ball doing it. So I served them well, as well.