Earning the rent selling books at the dayjob, as the frantic fuss out their last minute Xmas gifts. Just as I rounded the corner from straightening the sports section, this big cowboy - hat, boots, the whole nine - comes storming out of the religious section. He spots my work badge dangling from my neck.

"Well, sir," I smiled, "I realize Willie's a religious figure in Texas. But you won't find his book there!" We laughed as I led him to the music section....

Diggin' Up The Bones Of Strummer And Jones

To accompany that bit of verbal nostalgia below, here's some of the best live footage of prime Clash I've seen. A legendary gig at a Manchester fun fair (as they call carnivals in the UK), it was filmed for Tony Wilson's So It Goes series, which ended up being where many of UK Punk Mk. I's greats would make their television debuts (including a pre-record contract Sex Pistols, notoriously debuting "Anarchy In The UK" days after it was written). This is not too dissimilar from the Clash that I remember seeing, barring their having morphed into amphetamine rockabilly musicians by then, at least visually. Enjoy!

Posted by timnapalm at 9:23 AM No comments:

REPOST: Joe Strummer Is Still Dead, And I Don’t Feel So Good Either.... 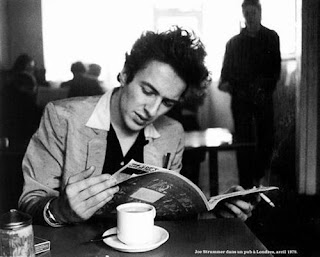 Ten years' gone, and it's harder to believe all the time. Here's what I had to say about Joe Strummer on the second anniversary of his death in 2004, at my old MySpace blog. (Wow! Remember THAT?!)

It was two years ago today that I awoke in a world where Joe Strummer no longer lived. I don't like that idea. The way I found out was bad enough: The clock radio going off, on the horrid Top 40 station which was the only thing I could pick up on the poxy device. The idiot deejay went on to prove how little he knew or cared about Joe or the Clash in the manner in which he delivered the news: "The band pretty much died with the punk movement in the late '70s….Here's 'Rock the Casbah'!"

I bawled. I bawled like I've bawled for few. This was no stupid rock star death: A man walks his dogs, sits by his fire, then succumbs to a heart ailment few have and which is never discovered until it kills you. But Joe Strummer was no stupid rock star, nor was he merely a rock star. The Clash were just like that. They went well beyond entertainment, and once you heard them, you expected all the other music you listened to, to live up to that standard, to actually Say Something. Otherwise, it was (as an obituary that ran in the NME put it) just "pathetic, patronizing noise."

I'm lucky enough to have seen the Clash when I was young. Very young – I was 14, and it was London Calling time. And that night had a major impact. That night was what made a musician out of me. Everything else paled next to this band onstage. There was so much passion, so much conviction pouring off that stage. And I'd dare say 75% of that came from Joe Strummer. In a band that had not one frontman, but three, Joe was still the most riveting. This was a man bursting to explode out of his own skin, wanting to reach every last person in the theater that night, wanting to physically grab them, and scream, spittle flicking from his mouth, 'WAKE THE FUCK UP!! CAN'T YOU SEE WHAT'S GOING ON OUT THERE?!! THIS WORLD HAS GONE FUCKING MAD!!! WHAT ARE YOU GOING TO DO ABOUT IT?!!"

They just don't make bands like that anymore. They don't make men like Joe Strummer anymore. I will never forget reading a Rolling Stone profile of the Clash around the time I saw that show. It began with Strummer smoking and swearing at the management of the theater they were playing in San Francisco, insistent that the first ten rows of seats be removed.

"We can't do that! People have bought tickets for those seats!"

Strummer insisted that anyone there to see the Clash wanted to dance, and wouldn't want to be seated. "Don't you see? Our audience will RIP those fucking seats out!" Then he said if anyone complained, he'd personally reach in his pocket and refund them, and said he would get on his hands and knees with a screwdriver himself and remove those seats if he had to.

That anecdote says almost everything you need to know about Joe Strummer. Would Nikki fucking Sixx do this? Would he be so committed? Would Fred fucking Durst? I don't think so.

If Napalm Stars have a 116th of the impact or importance of the Clash, I would be a very happy man. The Clash are still reaching hearts and minds to this day, although I sometimes wonder on what level: I know young Clash fans who voted for Bush and said they'd go to fight in Iraq. If Strummer were alive to hear such a contradictory thought stream coming out of such supposed fans, I know he'd be giving these kids a death stare and asking, "Have you been fucking listening to anything I've sung?"

I could go on a lot longer. Instead, let me leave you with the words to a song I wrote days after Joe's death, about the power he and the Clash had on lives like mine. It's called "(I Come From) A Place Like Any Other."

I knew what I wanted
But I didn't know how
To make a noise that made some sense somehow
I heard somebody singing
It made all the difference
He showed me where all the answers were hidden
And when the world said no
Rock 'n' roll said yes
And when the world said go
Rock said, "Go west, young man!"
Go west, young man….
I come from a place like any other

Posted by timnapalm at 9:15 AM No comments:

Still, taking some stock is good for the soul. And it keeps me occupied. I think the best action for me would be to post a list of the good things that happened in my personal life this year. Count your blessings and all that, right?

So, what made the busted ankle, living in vermin-infested motels, barely eating, and fleeing Denver by the skin of my teeth worthwhile? How about:

2012: The year I was able to finally buy an amp and return to rock 'n' roll trench warfare.  I found myself in Dave Mansfield's Roxy Suicide, playing lead guitar to some smashingly glamtastic punk rock thoroughly steeped in Ramones/Dolls/Cramps seasoning. In the process, we played some storming dates, including some shows opening for Wednesday 13 and those power pop sleaze-rockers supreme The Biters. And I have to say: Dave's a fine songwriter and front-man who really knows how to work a stage and a crowd, while Mike and Olivia were as tight and powerful a rhythm section as I've ever had the pleasure to work with. I also took on a pair of unusual solo dates playing birthday parties, including a set of '80s new wave covers suitably retooled for my punk rock approach, and another set of Hormones/Napalm Stars hits rendered by just me, my Les Paul, and my Fender Super Champ as if I thought I was Billy Bragg or something.

But the best thing to come from returning to rock 'n' roll was....

A seminal punk rock performer you have immense respect for writes you at Facebook and asks if you'll play guitar for her. Do you take the gig? Wow, how silly are you? Alice was on the latest leg of the indie tour she's undertaken to promote her excellent book, Violence Girl, pulling into the local indie punk rock record shop and reading select passages, then performing a corresponding song with a local guitar player of her choosing. In this case, it was Denver's Wax Trax Records and me. This was an honor and a real pleasure. Alice is a real sweetheart and a powerful performer, her voice having lost nothing over the years. We enjoyed such a great personal and musical chemistry, we agreed we need to work together again. So, be looking for a duet or  two in the future. One of the greatest musical experiences of my life, seriously.


Besides, it meant I got to play "Babylonian Gorgon" with the original artist:


Besides, had I not moved here, I might never have had the following opportunity....

NEVER thought I'd see this day! Yes, I had a very pleasant telephone interview with this major hero of mine in 1996, for The Austin Chronicle.  And I went to PiL's Fun Fun Fun Fest gig merely thinking I was seeing Lydon's fine new reincarnation of PiL, and seeing my old friend (and Napalm Stars producer) Tony Barber, ex-Buzzcocks bassist and now-Pil bass tech. I did not realize I would be led to John Lydon's backstage tent! Nor that I would have a very pleasant, wide-ranging, 2-hour conversation that ran all over the map. He bade me a warm farewell at the end. I genuinely felt I'd made a new friend. Not anything I expected from the evening, or from Johnny Rotten. Very pleasant, indeed.


Well, time to get on with my Mayan doomsday. I have a job to go to, apocalypse be damned! Stay tuned as I try to think of the best CDs, books, movies, etc., that I enjoyed this year. Ta!

*scratches his head, rubs his eyes, takes another sip of coffee* Man, how could this joint get into such a state of neglect and disrepair...?

Yep, here I am. I found my keys, after months of drama, and I'm here to clean up the blog, splash a new coat of paint up, and let you know I can really shake 'em down. I report to you from the lushly appointed New Napalm HQ  in the beautiful, newly gentrified east side of Austin, TX.

I really have no topic of conversation today. (Like that ever stopped me before!) But I should wish a pair of belated happy birthdays to a pair of historic figures, the first one being my mother. The second being Little Richard. If I have to explain Mr. Penniman to you, you're beyond hope or help. Thanks for saving us all from a lifetime of Patti Page, Richard....