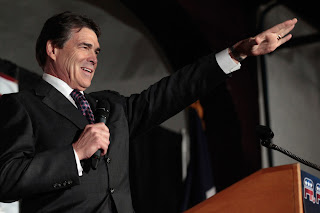 *smirks* Wow, what can I say about this snap of Rick Perry? That the former Aggie cheerleader may be more dangerous than we think? That speech he made on Saturday announcing his candidacy certainly set him apart from his GOP adversaries in the Presidential stakes. He sounded like Bush minus the grammatical errors and mispronunciations, and was throwing huge chunks of red meat to those lions at that conservative rally. Quoting Margaret Thatcher also indicates something sinister about this guy. I still say he's a jackass, though....

Thanks to Tom Lundin at The Denver Eye for forwarding this photo. And check out his blog - it's reet!
Posted by timnapalm at 9:47 AM