The Remains Of The Toxic Narcotic, Pt. 4: Complaints

The final part of the inventory clearout for what was to be my online punkzine, The Toxic Narcotic: A review of Bay Area New Punk behemoths, Complaints. 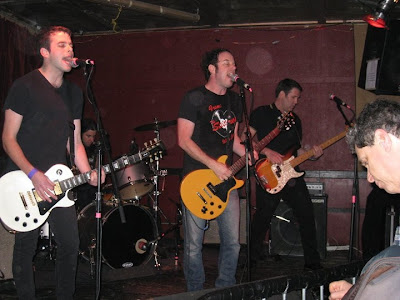 I've got no complaints about the complaints*
wherein tim demonstrates he really knows how to milk a bad joke.... 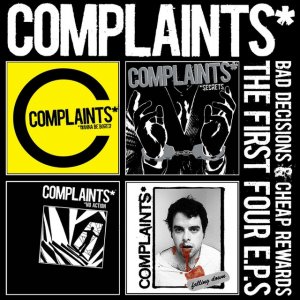 To use a cheesy, obvious opening: I've got no complaints about the Complaints*. (Aside from, "Why the asterisk in the name? And isn't there a capitalized definitive article in the name?" The mark of quality in any rock 'n' roll band name is a plural name with a capitalized definitive article: The Yardbirds, The Clash, etc. Unless you're Buzzcocks or the Sex Pistols. But I digress....)
*ahem!* As I was saying, "I'VE GOT NO COMPLAINTS ABOUT THE COMPLAINTS*!" These San Franciscans, featuring refugees from the Swingin' Utters and several other punk rock all-stars I can't remember off the top of my noggin and am too lazy to open up a web browser to look up, just issued (from what I can see) is a digital-only collection of four vinyl EPs' worth of smashchord punk goodness from across their history. It's as instantly classic and cohesive as Singles Going Steady or High Energy Plan or any other long-playing summary of previous shorter-playing highlights.
But yes, I've got no complaints about The Complaints! (Whom I've just decided to strip of their asterisk and grant them an honorary definitive article, as their name's the only complaint I have with them, as cool as it is, as it is!) I mean, they play punk rock the way I like it: Taut, lean, stripped-down, as energetic as jumping beans on a Jolt Cola-and-PixieStix bender, brimming with post-Thunders lead work and imaginitive two-guitar arrangements. And like the best vintage punk bands, they write high-wired, tough pop songs that are perfect otherworld hit records without any mush or wimp-factor. (A clue to their influences: The record closes with an aggressive take on Slaughter And The Dogs' “Cranked Up Really High,” minus the la-la-la's over the coda.) This could be 1977 or 2013 in The Complaints' world - it doesn't matter! This is young and fresh and wired and electric, and sends you into bedroom pogo hysterics that'll have the plaster fearing for its life! Isn't this what all great punk rock's about, aside from sweaty live energy?
Nah, I've got no complaints about Complaints*. (Alright! It's their name, I'll use it! Jeeze....) Bad Decisions And Cheap Rewards: The First Four E.P.s is as perfect a punk rock record as you'll find out now. Even the sleeve art, reproducing the EPs' fronts in a grid, looks perfect! If this were the old days and this on vinyl and I still owned a turntable, I'd be spinning this smooth, same as I did Never Mind The Bollocks and Singles Going Steady and Generation X. Dig the new breed, dad....
(http://complaints.bandcamp.com/music to download the individual singles and contact the band; digital LP available at http://www.amazon.com/Bad-Decisions-Cheap-Rewards-First/dp/B006W5HNGG/ref=sr_shvl_album_5?ie=UTF8&qid=1361756689&sr=301-5; http://modernactionrecords.com/)